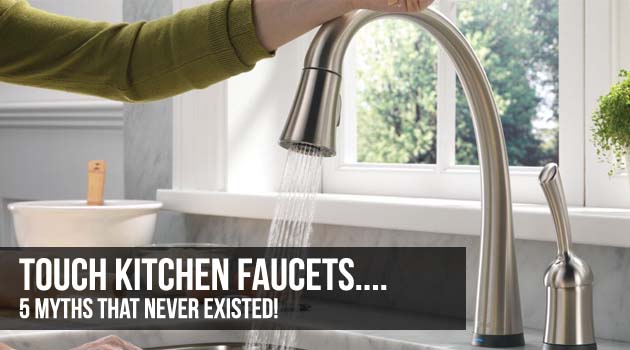 When touch-sensitive faucets first hit the market several years ago, they were nowhere near as sophisticated as they have since become. Just brushing the faucet accidentally with your arm could cause the water to start running. Unfortunately, these faucets still have a bit of a bad reputation even though a lot of the kinks have been worked out of the designs, and some customers hesitate to buy them if they’ve got pets and small children.

If you stop and think about it, you’ll realize that today’s designers have anticipated these problems. Grohe and Kohler sell touch sensitive faucets that are priced in the thousands, so clearly they have worked on solving the problems that plagued these faucets in the early days. Check out some customer reviews on Amazon and you’ll see that there are many reliable, worry-free touch faucets on the market.

These are the 5 most common myths about touch sensitive faucets, and why you don’t need to worry about them.

Faucet Turns Itself Off and On

A good quality touch faucet from a manufacturer such as Danze, Delta, Grohe or Kohler is not going to switch itself on and off, even when you use them with a metallic kitchen sink. In the old days, the sink could act as a conductor and send a signal to the faucet when touched. There may be some cheap generic faucets out there that still have this problem, but you won’t have to deal with it if you buy a good brand.

Just keep in mind that if you have a metal sink (and most of us do) you have to be sure that the touch faucet is properly insulated when you install it. If there’s a gap in the insulation, you could end up with the problem of your faucet switching on whenever you touch the sink.

Do your homework and only buy a touch faucet if you can find lots of positive reviews of it online. Check out ratings and comments from customers and you’ll get a sense of the faucet’s quality.

It’s not surprising that people would be concerned about this. If you turn on the water by touching the faucet, then how on earth are you supposed to clean it without the water switching off and on the whole time?

The answer to this question is that the touch faucet doesn’t respond to every type of touch in the same way. A touch that lasts milliseconds will activate the flow while a grip, push or prolonged contact will not. The touch faucet will only turn on or off it you touch it briefly.

Don’t waste your money on a touch faucet that doesn’t have this feature. The good news is that all of the touch faucets I’ve tried out have used this technology. Even the less expensive makes use a mechanism like this to prevent the faucet being activated by accident.

They’re not suitable if you have small children

No technology is perfect, and each has its pros and cons. As good as the touch sensitive technology is, it still can’t tell the difference between an adult and a child. If your toddler uses the touch faucet, they might forget to turn it off.

But this does not necessarily mean that these faucets are unsuitable for small children. Think about how difficult it is for a young child to figure out how to turn on a conventional faucet. When they are learning to use a faucet, it is much easier to use a touch sensitive faucet since they don’t have to be able to reach the handles, and they don’t have to be coordinated enough to turn them. With a touch faucet, children can quickly and easily figure out how to turn the water off and on. I haven’t yet heard any complaints from parents about using these faucets with small kids.

Think of how much easier it is for a toddler to turn off the faucet if they only have to touch it!

Pets Can Turn On the Faucet

As I said earlier, touch faucets are now designed with smart technology that can tell the difference between prolonged contact and a light touch. If a cat brushes past or a budgie perches on the spout, the faucet won’t respond because the touch lasts longer than a few milliseconds. It’s highly unlikely that your cat will decide to start touching the spout just to watch the water switch on and off.

In any case, even if the faucet is accidentally activated, it has a built-in timer that switches it off if the faucet is inactive for a certain period. So the worst-case scenario is that your water is running for about 3 minutes before automatically shutting down.

It’s true that these faucets are powered by electricity. However, the faucets aren’t connected to your main power supply. They use DC power only, and are run using 1.5 volt batteries. The total amount of voltage is a maximum of 9 volts, which will not harm you.

Also, the electricity is only connected to the outside of the faucet. The water runs through pipes that are non-conductive, so it doesn’t make contact with the current on the outside.