Loss of pressure in a faucet is a very common occurrence that can have several possible causes. Maybe there is a water pressure problem in the whole home, or maybe there’s a blockage affecting the flow in one faucet only.

If you’re noticing a loss of pressure at one of your faucets, you should first go around and check all of your other faucets. Is there a water pressure problem elsewhere in the house? If so, there’s probably a problem with your entire water system. However, if the problem is only with one faucet, you know the problem is close to the faucet itself.

I had this exact problem recently. Suddenly I noticed a big drop in the water pressure in my kitchen faucet until only a trickle remained. Every other faucet in my house was fine. I did an online search but most articles had little advice besides checking the aerator.

The tiny screen at the point where the water flows out of your faucet is called the aerator. Its purpose is to trap debris, and it works very well. In some cases you will get a buildup of sediment in the aerator, or larger particles of debris will accumulate and interfere with the flow. This is easy to fix. Simply unscrew the aerator and clean out any debris or sediment. Replace the clean aerator and try the faucet again. If the flow has returned to normal, you’ve fixed the problem.

What if the aerator isn’t the problem?

If cleaning out the aerator doesn’t solve your low water pressure problem, then there is a blockage elsewhere in the system. Now it’s time to start investigating where exactly the blockage is. You’ve still got some options.

You can confirm that the blockage is in the faucet by unscrewing the supply lines to the faucet. First shut both the hot and the cold water valves off before you do anything else. Now unscrew the flexible lines that supply water to your faucet at the point where they connect with the faucet. Usually these are braided and either gray or white colored. Once they are disconnected, put the ends in a bucket and gradually turn the water on again. If the water pressure going to the bucket is good, the blockage is definitely in the faucet. If the pressure isn’t good, there is a blockage somewhere in the pipes that lead to the kitchen.

If the Faucet is Blocked

Now you have confirmed that the problem is in the faucet. The next thing to do is disassemble the faucet itself. Hopefully you still have the instructions that the faucet came with when you bought it. If not, look up your faucet online and see if you can find these instructions. Even if you can’t, most faucets are easy enough to figure out without instructions.

Check the cartridges. Each lever of your faucet will have a cartridge, so a one-lever faucet will have one cartridge and a two-lever model will have two cartridges (one each for hot and cold.) Most faucets have a decorate cap which you must pry off in order to remove the screw underneath it. After you take out this screw, pull the cartridge out. You may have to pull hard to get it out, but be careful not to damage the faucet.

Inspect the cartridges once they are out. Is there a lot of whitish-green sediment built up on them? If so, this is the likely culprit for your water flow issue. You should have no trouble buying new cartridges at any home improvement retailer for under 15 dollars. Replace the cartridges and your faucet should work fine again. While you’re at it, why not change the washers too? These get worn down after a while and cause drips, and since you’ve already got your faucet disassembled, it’s a good time to replace these.

If your cartridges seem clean

When I inspected my cartridges, I was surprised that they still looked as good as new. I realized that the blockage had to be inside the faucet piping itself. Next I used a compressor and blew air through my faucet. I noticed that hardly any air was coming out the other end. Now I knew that there was built-up sediment blocking the inside of my faucet.

Vinegar is your best friend in this case. I put the faucet into a shallow container and added enough vinegar to submerge it. I then left it to soak overnight. The next morning the faucet was clean and looked like I’d just bought it. When I tested it by blowing air through it, I could tell that the air was passing through unobstructed and my problem was fixed.

The final step is to reassemble everything and try it. That’s what I did, and the water pressure was back to normal in the kitchen faucet again. My wife and I were both happy to have a working faucet without having to spend money on a new one! 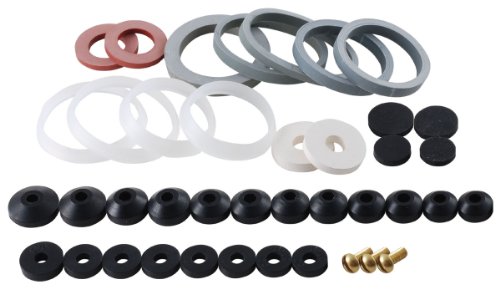