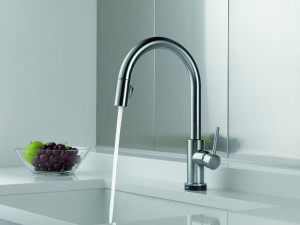 Recently we reviewed a large chrome kitchen faucet called the Delta Trinsic. The article in question talked about the many fine features of this attractive high-arced faucet with its dual-mode pull-down spray wand, automatic shut-off, Touch20 technology, Magnatite docking, and TouchClean nubbins, as well as other great features. At that point, there was some concern about how reliable this faucet was, with all of its deluxe features. If you look at the consumer reviews, you see a pretty even split between satisfied customers and those who were less than satisfied.

I decided to go ahead and install one and in next to no time I had a Trinsic faucet gushing water in my very own kitchen. The installation instructions borrow a technique from IKEA, and consist of pictographic step-by-step directions that are foolproof and easy to understand. Even if you’re not a big fan of spending your weekends with your head under your kitchen sink, this is a pretty simple and painless procedure.

This faucet has been performing perfectly since I installed it. However, there was a bit of a learning curve involved in familiarizing myself with the Touch20 technology. This Trinsic faucet is not excessively sensitive, and I was happy to discover that it doesn’t switch on and off in response to the slightest touch. This allows you to change the water temperature or swivel the spout without interrupting the flow of the water, which is definitely an advantage. To turn the faucet off and on, you simply need to touch any part of the handle or faucet neck with a quick, decisive motion. Once you figure this out, you’ll find that the Trinsic operates reliably and consistently every time.

At first I was a bit nervous about getting a faucet with so many bells and whistles – I felt that there was just so much that could go wrong. But now that I’ve been using it I realize that the touch-sensitive feature makes it effortless to operate. It’s true that I’ll have to replace all six of the AA batteries at some point to keep the faucet working, and the performance may suffer a bit as the batteries run down. But until then, I don’t foresee this Delta Trinsic faucet giving me any problems at all. It works like any high-quality, well-made faucet but it looks great and has an amazing trick up its sleeve with the touch technology.

>>Check out Amazon for more discounts<<